In March 2021, we announced that Acer and Relief entered into a Collaboration and License Agreement (CLA) for worldwide development and commercialization of ACER-001. ACER-001 (sodium phenylbutyrate) is being developed for the treatment of various inborn errors of metabolism, including UCDs and MSUD. ACER-001 is a nitrogen-binding agent in development for use as adjunctive therapy in the chronic management of patients with UCDs involving deficiencies of carbamylphosphate synthetase (CPS), ornithine transcarbamylase (OTC), or argininosuccinic acid synthetase (AS). ACER-001 includes a multi-particulate dosage formulation for oral administration designed for palatability1 while dissolving quickly. BUPHENYL®, a powder formulation of NaPB, has been approved by FDA for UCDs with demonstrated efficacy and safety in UCDs patients of all ages. 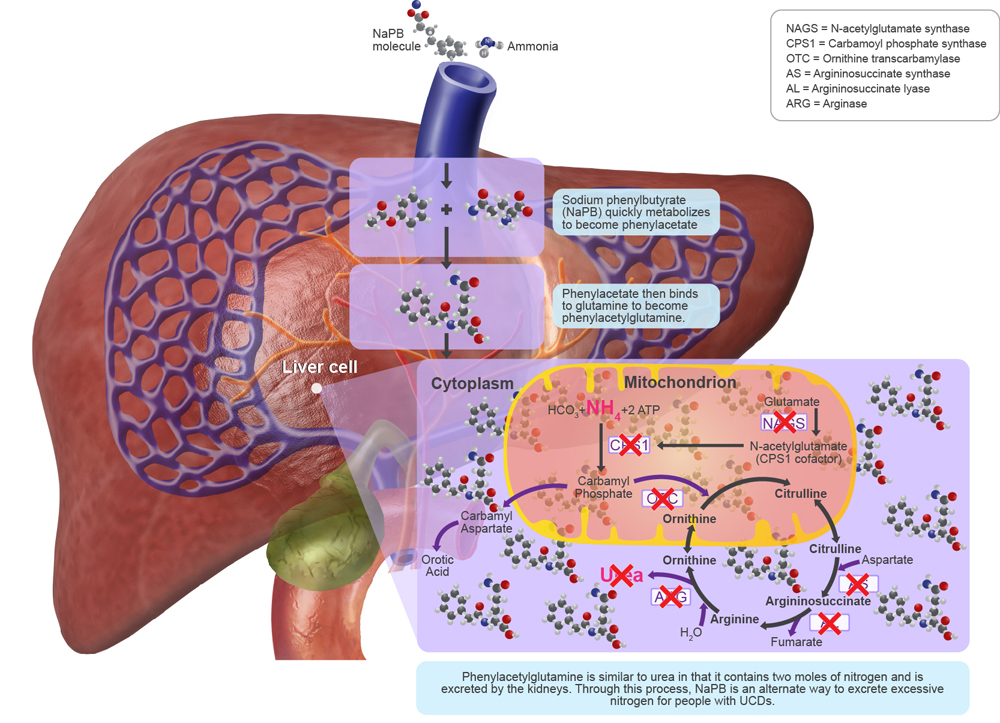 Current Treatment Options for UCDs
The current treatment of UCDs consists of dietary management to limit ammonia production in conjunction with medications that provide alternative pathways for the removal of ammonia from the bloodstream. Dietary protein must be carefully monitored, and some restriction is necessary; too much dietary protein causes excessive ammonia production. However, if protein intake is too restrictive or insufficient calories are consumed, the body will break down lean muscle mass to obtain the amino acids or energy it requires, which can also lead to excessive ammonia in the bloodstream. Dietary management may also include supplementation with special amino acid formulas developed specifically for UCDs, which can be prescribed to provide approximately 50% of the daily dietary protein allowance. Some patients treated with sodium phenylbutyrate may also require individual branched-chain amino acid supplementation.

Medications for UCDs are primarily comprised of nitrogen scavenger drugs, which are substances that provide alternative excretion pathways for nitrogen by bypassing the urea cycle.2 The use of these alternative pathways for nitrogen removal is important for the management of acute episodes of hyperammonemia and are also included as part of a long-term treatment regimen for UCDs patients. Current nitrogen scavenger treatments for UCDs are based on phenylbutyrate or benzoate, which conjugate with glutamine or glycine, respectively, allowing for urinary excretion of nitrogen as phenylacetylglutamine or hippurate, respectively.

According to a 2016 study by Shchelochkov et al., published in Molecular Genetics and Metabolism Reports,3 while nitrogen scavenging medications are effective in helping to manage UCDs, non-compliance with treatment is common. Reasons given for non-compliance include the unpleasant taste associated with some available medications, the frequency with which medication must be taken and the high cost of the medication.

Phenylbutyrate is available as both NaPB, which is marketed as BUPHENYL®, and glycerol phenylbutyrate (GPB), which is marketed as RAVICTI®. While a study provided by Horizon Therapeutics, Inc. in the RAVICTI® package insert involving 46 adults with UCDs demonstrated that BUPHENYL® and RAVICTI® were similarly effective in controlling the blood level of ammonia over a 24-hour period, many patients who take their medicine orally prefer RAVICTI®, as it is significantly more palatable than BUPHENYL®. However, the average annual cost of RAVICTI® is $950,000 (based on patient weight), which is often prohibitively expensive.4 In cases where dietary management or medication is not effective, patients with UCDs may require a liver transplant.

Currently approved therapies for UCDs, including BUPHENYL®7 and RAVICTI®8, are required to be administered with food. BUPHENYL® is required to be administered in a fed state due to its aversive odor and taste, with side effects including nausea, vomiting and headaches, which can lead to discontinuation of treatment.1 Additionally, prescribing information states that the BUPHENYL® food effect is unknown. RAVICTI® PK and pharmacodynamic (PD) properties were determined to be indistinguishable in fed or fasted states.9

Based on the results from the food effect study within the ACER-001 BE trial, we commissioned Rosa & Co. LLC to create a PhysioPD® PK model to evaluate the potential food effect on exposure, tolerability and efficacy of ACER-001 in UCDs patients. Results from this in silico model suggested that administration of ACER-001 in a fasted state required approximately 30% less PBA to achieve comparable therapeutic benefit in a fed state. In addition, the model predicted that administration of ACER-001 in a fasted state compared to administration of BUPHENYL® or RAVICTI® (same amounts of PBA) in their required fed states would be expected to result in higher peak blood PBA, PAA and PAGN concentrations, predicting a 43% increase in urinary PAGN levels (a negative correlation between blood ammonia area under the curve and 24-hour urinary PAGN amount has been shown).10

Publication of Bridging Studies
In April and May 2022, we announced the presentation of posters at the Society for Inherited Metabolic Disorders (SIMD) Conference and Genetic Metabolic Dieticians International (GMDI) Conference, respectively. These posters summarize results from the two Phase 1 bridging studies that evaluated the bioavailability and bioequivalence of ACER-001 (sodium phenylbutyrate) compared to sodium phenylbutyrate (BUPHENYL®) powder.11,13 The objectives of the two studies were to determine the bioequivalence of ACER-001 administered as a suspension relative to sodium phenylbutyrate (BUPHENYL®) powder administered as a solution in healthy adult volunteers after a single dose under fasting and fed conditions, and to assess the effect of a high-fat meal on the pharmacokinetics (PK) of taste-masked sodium phenylbutyrate (ACER-001).

Publication of Taste Assessment Studies
In April and May 2022, we also announced presentations at the SIMD Conference and GMDI Conference, respectively. These posters detail results from two Phase 1, open-label, repeated measures, taste assessment studies of polymer-coated sodium phenylbutyrate (ACER-001) and sodium phenylbutyrate (BUPHENYL®) powder.12,14 The studies included healthy panelists who were required to complete a training program for a minimum of 6 months that educated panelists on the identification, description, and quantification of sensory attributes of products.

The objective of the two taste assessment studies was to identify and quantify the intensity of perceived flavor attributes of ACER-001 relative to sodium phenylbutyrate (BUPHENYL®) powder. Results from both studies concluded that ACER-001 was shown to have overall lower flavor intensity scores than sodium phenylbutyrate (BUPHENYL®) powder when administered within five minutes of preparation.

ACER-001 Registration Plan (UCDs)
We are seeking FDA approval in the U.S. to market ACER-001 for administration initially under fed conditions for the treatment of UCDs using a regulatory pathway established under section 505(b)(2) of the Federal Food, Drug and Cosmetic Act (FDCA) that allows applicants to rely at least in part on third party data for approval, which may expedite the preparation, submission, and approval of a marketing application. Because FDA has approved an NDA for BUPHENYL® as adjunctive therapy in the chronic management of patients with UCDs involving deficiencies of CPS, OTC or AS, which is referred to as the reference listed drug (RLD), we intend to rely on the RLD’s preclinical and clinical safety and efficacy data, while supplementing the data with bridging studies that show similar relative bioavailability of ACER-001 compared to BUPHENYL®.

On June 21, 2022, we and Relief announced that the FDA, citing the need to inspect a third-party contract packaging manufacturer, has issued a Complete Response Letter (CRL) regarding the NDA for ACER-001 (sodium phenylbutyrate) for oral suspension for the treatment of patients with UCDs. In the CRL, the FDA did not raise any approvability concerns related to the efficacy, safety, or pharmacokinetics of ACER-001. On July 18, 2022, we announced the resubmission of our NDA to the FDA for ACER-001 (sodium phenylbutyrate) for oral suspension for the treatment of patients with urea cycle disorders (UCDs), and on July 28, 2022, we announced that our resubmitted NDA was accepted for review by the FDA. The FDA designated the NDA as a Class 2 resubmission and set a Prescription Drug User Fee Act (PDUFA) target action date of January 15, 2023. We also notified the FDA in the resubmission that the third-party contract packaging manufacturer is ready for inspection. Additional existing nonclinical information as requested by the FDA in the CRL but identified as “not an approvability issue”, as well as labeling and other required updates to the original NDA, were provided in the resubmission of the NDA.

ACER-001 is an investigational product candidate which has not been approved for any indication by FDA, the European Medicines Agency (EMA), or any other regulatory authority.