The urea cycle is a component of protein metabolism that takes place primarily in a person’s liver. When the body breaks down protein, ammonia is produced, which is toxic. Enzymes in the urea cycle are responsible for the process of converting ammonia into urea, which is then excreted harmlessly from the person’s body. 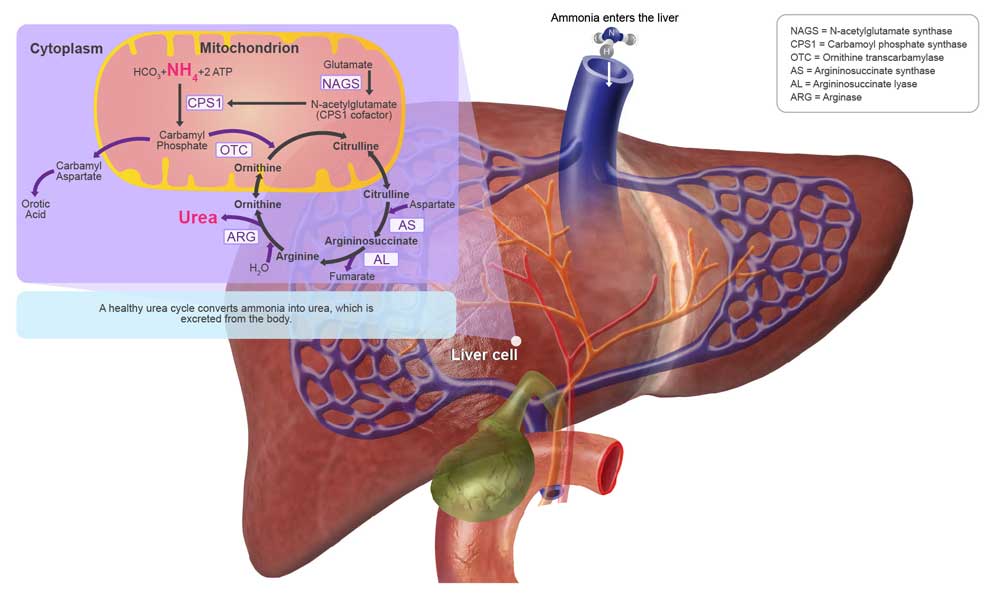 Urea cycle disorders (UCD) are genetic disorders caused by mutations in genes that code for enzymes in the urea cycle, resulting in a deficiency of those enzymes. Deficiency of any one of these enzymes required for ammonia detoxification constitutes a UCD:1

When one of these enzymes is deficient, the urea cycle is interrupted, resulting in hyperammonemia (elevated ammonia in the blood), encephalopathy (changes in alertness related to brain dysfunction), and respiratory alkalosis (an imbalance of oxygen and carbon dioxide in the breathing cycle). 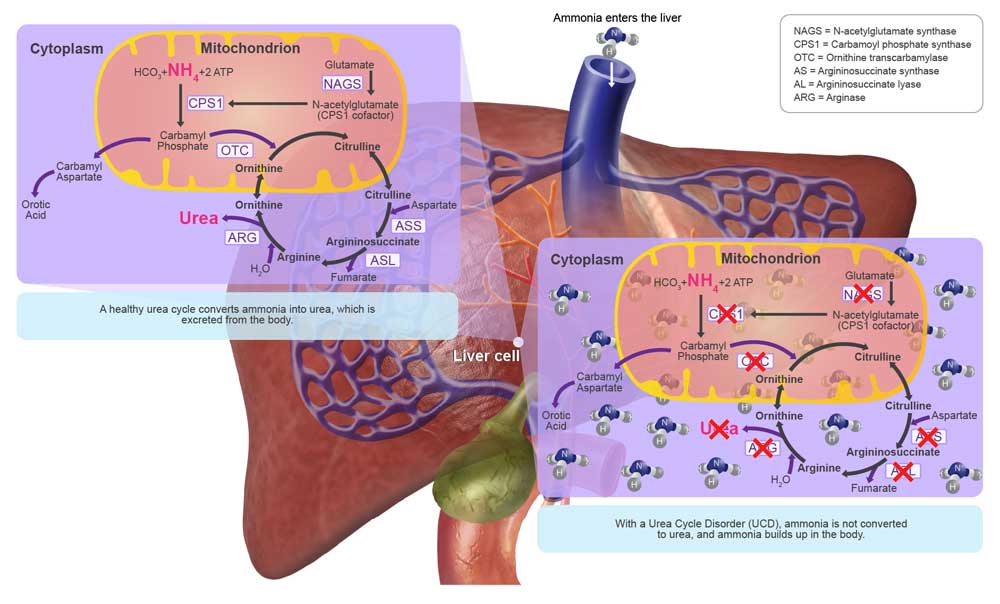 Ammonia is a highly toxic substance that can reach the brain through the blood. It can cause reversible or irreversible brain damage, coma and/or death.1 Other signs and symptoms may also be present based on the specific enzyme deficiency, such as AL deficiency, which may result in hypertension and deficiency of nitric oxide (NO) production.2 Arginase deficiency is a bit different from the others, not usually presenting with hyperammonemia and its accompanying symptoms but rather mimicking cerebral palsy.

In individuals with a UCD involving a severe deficiency, infants may appear normal at birth but quickly develop symptoms of lethargy (abnormal sleepiness), which can progress to coma. Vomiting may be an early symptom, along with instability in temperature, respiratory distress, and rapid breathing.1,3 A less severe deficiency may produce symptoms such as poor appetite (fussy eater) and unconscious avoidance of protein, which may at first go unnoticed. Older children or even adults may not be diagnosed immediately, despite experiencing agitation, vomiting, and sometimes appearing intoxicated in the absence of alcohol consumption. Initial symptoms may be brought on by an acute illness which produces more severe symptoms and may eventually lead to a correct diagnosis; in other cases, children or adults present with these unusual symptoms multiple times before an accurate diagnosis is reached.1 Affected individuals may also have an enlarged liver and abnormal liver function tests.3

Urea cycle disorders are the most common serious liver-based inborn errors of metabolism, occurring in approximately one in every 30,000 to 46,000 live births.

Early clinical suspicion and diagnosis is especially important for people with severe UCD to avoid the neurological damage of prolonged episodes of hyperammonemia. Newborn screening is available for some but not all forms of UCD and may be helpful in prevention of early prolonged hyperammonemia. Prenatal diagnostic testing is possible in many countries, though it would not normally be mentioned in a pregnancy unless there was a previously diagnosed family member. When prenatal genetic testing is contemplated, genetic counselling should be offered (available from clinical geneticists/metabolic disease specialists and genetic counselors working with them).3

Diagnosis of a UCD is based on clinical suspicion with confirmation by biochemical and molecular testing. A person with an abnormally high plasma ammonia concentration of unknown cause strongly suggests the presence of a UCD. The person would then be evaluated for UCD enzyme deficiencies. Biochemical testing including such tests as urine organic acids and blood amino acids is useful in these cases. Molecular genetic testing to identify the mutation and/or measurement of enzyme activity allows for a definitive diagnosis of a UCD.1

Treatment for a severe episode of hyperammonemia may include dialysis, hemofiltration, and/or ammonia scavenging medications that allow alternative methods of excretion of the excessive ammonia to help prevent the serious neurological impact of hyperammonemia.3 For people with severe UCD, liver transplantation is an option which some consider a cure for UCD. However, liver transplantation carries its own risks and accompanying health issues including risk of surgery, rejection of the transplanted liver, and the lifelong need to take medications to suppress the immune system.4 Liver transplantation in children also carries its own set of considerations, including the currently unknown impact of life-long immunosuppressant drugs on a child’s growth, development, and psychological wellbeing.5,6

Ongoing medical therapy for UCDs includes strict dietary restrictions of protein often along with a special medical food containing essential amino acids to maintain a safe level of ammonia in the blood.3,7-9 Replacement of amino acids from the urea cycle such as arginine and citrulline (for some UCDs), and supplementation of vitamins and minerals that may be lacking due to protein restrictions is often employed.1

Acer, in collaboration with Relief Therapeutics, is advancing ACER-001(sodium phenylbutyrate) for the treatment of various inborn errors of metabolism, including UCDs and MSUD. The formulation consists of a core center, a layer of active drug, and a taste-masked coating designed to avoid the bitter taste in the mouth while quickly dissolving in the low pH of the stomach. ACER-001’s taste-masked formulation is aimed to improve the palatability of NaPB.